The eCommerce Revolution And Your Business

I had the difficult job, a couple of years ago, to convince a group of franchisees to change the structure of their businesses. These people were successful, had been running their branches of the company for decades in some cases and – perhaps unsurprisingly – my words fell mostly on deaf ears, even when backed by data and trends. The younger people were on board, and ready to make changes that made sense to them. Many of the older ones, however, were not.

The difficult part of the situation is that the strategies and principles these people used, had worked for thirty or more years, and were still working.

But less so each year.

They blamed the economy for the decreases, and in that they were right, but it wasn’t a depression in the economy that was causing the dip in their sales – it was the astronomical rise of eCommerce, and the emergence of a new generation of consumer.

Digital natives are people who have never known the world without easy access to the Internet. It’s as familiar to them as a pencil and paper are to their elders. These individuals have a lot of similarities to generations before them – they want to look good, feel good, be entertained and educated, fill their homes with beautiful and useful items, and be able to communicate and maintain close relationships.

The difference is not primarily in what they want, but in the delivery system they choose to use, and to which they have developed strong attachments. The new consumers stream entertainment on laptops, tablets or phones. They store books digitally and buy most items online – using a phone to do so, more than laptops, and way more than desktops, which are becoming rare outside of the workplace.

There is no fear of making purchases on the Internet, and a lower drive to shop in brick and mortar shops, sometimes amounting to an outright aversion. These consumers are happy to have robots pack and ship products to them, and even to interact with robots online – known as chat-bots. Many users can’t even tell it is a robot helping them with customer service, and most who can tell, don’t mind.

In general, just over half of the market – and this is growing – is comprised of people who shop primarily online, and when they do visit a brick-and-mortar store, it’s not for the products – it’s for the experience and the social interaction. There are exceptions on both sides of course, but in general, the goods people buy are similar, but the way they buy and consume them has changed.

Perhaps you’ve already done the math, but the older Millennials are now in their thirties and forties, with the majority of the Post-Millennial generation well into their twenties. They’re earning more. They’re having kids and building families and family homes. In other words, they’re taking on an increasing share of the consumer market, while their parents’ generation – still a significant portion of consumers – is steadily shrinking in size and in many cases decreasing their consumption due to a decrease in income.

Many who are financially well off are adapting to the new market along with the younger generations. It is not uncommon now to see a senior on a smartphone, and many have tablets. This often starts as an easy way to keep in touch with grandchildren, but once the technology barrier is broken, and the associated anxiety is somewhat relieved, other uses follow. Technology companies have begun taking elderly users more seriously as a potential market, tailoring hardware and software to the needs of older users. Many age-old business principles are teetering, and it is anyone’s guess when a given one may fall. Some already have.

We are not in a digital economy yet – but we’re no longer in the old one either.

As a business owner, you are in a difficult time. The scales have been heavy on the side of the Baby Boomers and Generation X, but it is now balanced out by the net-savvy, data-hungry, and famously impatient Millennial and Post-Millennial generations.

The older crowd often wants the brick and mortar store. They want to call on a phone and have a human being – a local one – pick up on the other end of the line. They want personal interaction and they want to see someone’s face when they hand their cash or card over the counter.

The Millennials want online purchasing from their mobile phone and same-day or overnight delivery. They want to bring up an FAQ or chat window to answer their questions, not to be bothered talking to some stranger on the phone. They want privacy from interaction, but have no hesitation in using a PayPal account or other online payment system.

Your job, as a merchant in the new millennium, is to either keep both happy, or abandon the one in favour of the other. If you abandon the older crowd, you alienate a significant portion of the buying public. If you abandon the younger consumer, the sales you made this year are probably going to be the highest you’ll ever make, as your target market dwindles away in the face of relentless time.

Abandoning either one means lopping off the top of the profit graph, and for most businesses, that would be crippling or fatal to the bottom line. Your job? Ride the razor’s edge between the two sides of the digital revolution, with a strategy to follow the growth where it happens.

Why this is Difficult

The reason this is such a difficult thing to do comes back to that job I had, convincing successful business people that what they’ve been doing, and what has worked, needs to change. You may be at the head of your company or department. You may be the decision-maker that can put into place what needs to be there to ride this transition through – but that doesn’t solve the problem.

Each industry, and each niche within it, will have unique needs. Some things will stay the same as they are now, some will need to change right away, and others can wait a bit. You’ll bear the burden of convincing stakeholders (owners, management, employees, and even existing customers) that what you’re doing will improve your business in the years to come.

Finally, you’ll need to do all of this in an environment of risk, balancing income and outlay, and there is no clear instruction manual that will lay it out for you. In short, you’ll need to be nimble, agile, and open-minded.

The Digital Revolution, like any toppling of an older regime, brings with it chaos, unexpected twists and turns, and an uncomfortable uncertainty. What is certain though, is that the revolution is upon us, and profound change is on the doorstep. 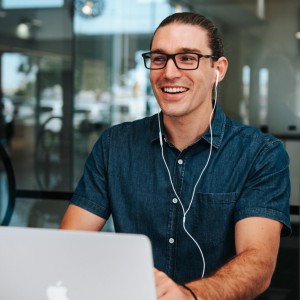 Hi there! I’m the lead content creator for Web Creation Studios. SEO and Lead Generation are my favourite topics!

Hi there! My name is Max and this is my blog about online marketing.

8 Best Ways To Speed Up WordPress

Does Your Site Have A Mobile Friendly Design?

Subscribe and get easy-to-follow, actionable articles about online marketing.